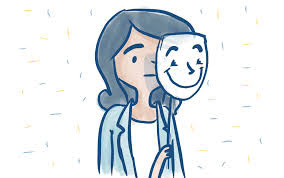 "The exaggerated esteem in which my lifework is held makes me very ill at ease. I feel compelled to think of myself as an involuntary swindler", said Albert Einstein. Unbelievably.

"Impostor syndrome is a phenomenon where people are unable to own their accomplishments. Despite evidence otherwise, those with the syndrome remain convinced they're frauds" (1987).

Originally thought to only effect high-achieving women*; then extended to minority groups; then graduates. From talking to colleagues, I'd say advertising creatives are also susceptible to it.

Because - unlike doctors or accountants or labourers - our work is subjective. There's no right or wrong in creativity (just like in Einstein's physics) - and this fosters a nursery of doubts.

Knowing this, you'd think agencies would go out of their way to reassure creatives - the ones that actually make the work that earns them money - that they're valued; that they're not imposters.

But in my experience, inexplicably, the ad industry conspires to keep creatives under the thumb of the phenomenon.

Even from the very beginning, with grads left with no option but interning for free, and juniors only getting paid a pittance - the least of every department.

Then throw in the awards culture, that artificially pits creative teams against each other, which inadvertently breeds unscrupulous douchebags that'll do anything to get ahead.

Plus the vitriolic comments on the blogs (The industry seems incapable of mum's simple rule: If you don't have anything nice to say don't say it at all) - screw professional camaraderie.

And then, if all that wasn't bad enough, a couple of years ago agencies began saying ideas can come from anywhere; totally diminishing the creative's role.

Without creatives, ad agencies don't exist. Simple. Can we say the same about other departments? But instead of allaying their 'imposter' fears, the industry systemically perpetuates them.

And yet in spite of all this, brilliant work still gets done. Those not eaten alive, the ones that prove to themselves they aren't imposters, come out the other side humbled and empowered - unstoppable.

I'll leave you with this from Bob Hoffman:"Creative people make the ads. Everyone else makes the arrangements."

*Although not the lead, it's also worth mentioning that I've met a confounding number of intelligent, successful women - from suits to strategists - who suffer from the 'Imposter Syndrome' in our industry. Embarrassingly, many of these points - lower pay especially - are compounded for them - and desperately needs to change.