“Cancer mixed with full blown aids” is one of the more frequent and repugnant comments we found on the industry blogs. Says Chris who, along with mates Michael and Jari, have created the GenerHATER.

The GenerHATER is a satirical look at the hateful comments that are all too commonplace in the industry.

‘Because why should people too busy with their own work miss out on insulting others’. Says Jari who, if you ask, will look you straight in the eye and tell you he’s not being sarcastic.

The boys trawled sites like Campaign Brief to find and aggregate the most common zingers. And, having done the research, they’d be the first to admit that some of the comments are pretty creative.

“Hate hate hate” says Michael, who’s better known in the industry as Fudge - a named bestowed upon him by Pat Vitetta; after a fagioli bean, which means ‘little bean’ in Italian.

What Fudge means is, this isn’t condemning feedback. Peer feedback absolutely has a role in our industry. It simply makes the point: if a robot can come up with the same-old burns then they don’t count for much, do they?
Posted by Christopher Ott at 15:47 No comments:

Think inside the box

As a card carrying creative, what I’m about to say could get me kicked out the circle. Despite what you think you know, ‘thinking outside the box’ is the single most erroneous platitude in the history of creativity.

Thinking inside the box is the real tip. Restrictions, constraints, parameters, boundaries – whatever you call them - create a box that keeps ideas salient, and surprisingly more creative.

“Give me the freedom of a tight brief” Ogilvy.

In the case of an advertising brief, it guarantees whatever idea you come up with (inside the box), it will achieve one of the main objectives of any campaign: to be remembered.

Advertising works by getting your brand stuck in your audience’s minds, so when they’re in a buying situation next they’ll be more likely to buy you.

This means for your ads to be effective, they need to be loaded with memory cues that make it easy for this to occur - like the little hooks on Velcro, each cue makes your idea more adhesive and easier to remember.

How do you make sure your ideas are stacked with said cues? Simple. You think inside the box. It’s impossible to introduce random or un-ownable objects, environments, symbols or ideas if your thinking’s focussed inside the world of the brand.

And not only does it make your advertising more effective; it also makes it more creative. Which achieves the other essential ingredient to effective advertising: to get noticed.

If your advertising doesn’t get noticed it may as well not exist. And to be noticed it needs to be creative. Thinking within the box achieves this, too.

A team of researchers (2009) looked for patterns in highly awarded ads – trying to crack the ad code - and what they found was that the best ads all had something in common:

They worked in the ‘closed world’ of the brand. In other words ‘the box’.

What does this all mean for creatives, and the suits and clients that brief them?

If we know an advert needs to be conceived inside the box to be effective and creative - to get noticed and remembered - then it gives us all a new starting point.

The suits can outline the box in their brief, it gives clients something to judge the ideas on (other than what their partner/dog/goldfish think), and it lets creatives start with more than just a blank sheet of paper.

“When forced to work within a strict framework the imagination is taxed to its utmost – and will produce its richest ideas. Given total freedom the work is likely to sprawl.”  TS Eliot.

‘Thinking outside the box’ is a bum steer. It will only lead you away from the solution to your brief. And if that happens you’ll end up wasting a lot of time reigning your ideas back to relevance – that is, instead of making magic.

Think inside the box. Not outside. 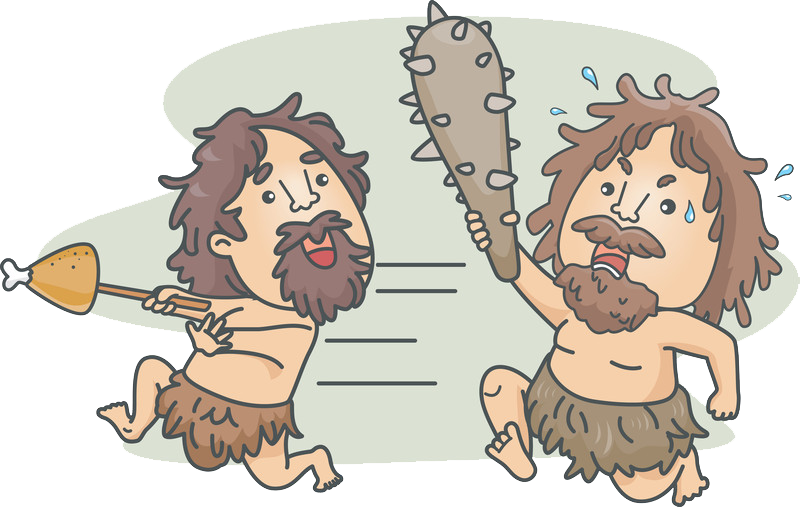 It's three thousand years ago. You're out hunting; you spear an antelope. You edge towards it, but as you approach you spot a stranger. He's stalking the same prize, ready to maul you should you try and take his dinner. What do you do?

Fast forward a few millennia. You're in the boardroom selling in your ideas to your CD, suits and planners. Another team, who're after the same prize, take aim and, like the spear to the antelope, tear it apart. What do you do?

With both, you have two options. Fight or flight. An instinct passed down from our ancestors' jungles to our modern boardrooms. And, now, possibly our single biggest barrier to creating great work.

Without friction there's no fire. And, like Yates said: "education is not the filling of a pail, it's the lighting of a fire".

We've been hardwired to avoid conflict. To think it's bad. To take it all personally. We're all haunted by this lingering instinct that gets our necks up.

Bill Shakespeare explored it in Hamlet, too: Whether tis nobler in the mind to suffer the slings and arrows of outrageous fortune, or to take arms and by opposing end them.

In other words, to say nothing and consider yourself noble (take flight with the excuse that you're the bigger person), or to fight for your work and end any disagreement.

With conflict groups in qual research, finding two groups diametrically opposed to an issue results in impassioned thrusts and parries - making them a goldmine for insights.

But, here's the thing: now that we're civilised - and because we're all grown ups - it doesn't have to be one or the other. This instinct that served us so well for so long is now obsolete. Worse, it's a handicap.

Conflict is where thinking gets sharp; tension where insights found, and chaos where creativity is cradled.

I can't find a reference of it being referred to as an heuristic before, but it certainly has all the hallmarks. It's an irrational system 1 shortcut we have to overcome in an evolved world.

And it's the people that shed it first - who don't take everything personally, or make things personal - who'll enjoy an upper-hand over the rest of us.

We open on a vain king and a pair of tailors (you've heard this story but stay with me). The tailors promise to weave the finest suit for the king; with one catch: the garment can only be seen by the smartest of people.

The king agrees and the tailors spin him the suit. And, to prove he was smart, the king absolutely adored it. So much, in fact, that he promptly paraded his new suit through town.

Not wanting to appear stupid, all the townspeople admired the king. That is, before a boy yelled: "He's got nothing on!". Spell broken, the crowd saw the truth - the king was naked.

If the king was our client. Are we (advertising agencies) the tailors, the crowd or the boy?

I'd say some agencies act like the 'tailors', hustling illusory and concocted ideas of how advertising works - which they know the client will buy. Rosser Reeves' USP is a great example.

Others are the 'crowd'. The ones who read the top 10 advertising books (i.e. Lovemarks) full of hunches, and blindly believe them without needing any evidence. Most social media agencies (peddling that growth comes from hyper-loyalty) are a good example.

And finally, there's the 'boy'. Which, thanks to the Ehrenberg Bass institute and the IPA's research into effectiveness, there's been a recent surge. I.e. Bob Hoffman, Byron Sharp, Martin Weigel.

But, as Paul Feldwick observes in his phenomenal book 'The Anatomy of Humbug', it's not black and white. Typically, agencies aren't one or the other. In reality, they're all of them.

He calls it 'the benign conspiracy'. Which hypothesises that all three characters are happening complicity inside an agency.

The planners are the 'tailors' (telling the client what they need to hear to get an idea up), the suits: the 'crowd' (being obsequious to the king/client), and the creatives: the 'boy' (dropping truth bombs - putting ideas first).


Like Van Damme doing the splits between two Volvo trucks, this is a delicate and dangerous balancing act. How do you think the king felt when the penny dropped he was naked?

Probably the same way our clients will feel if we persist with the (airquotes) 'benign' conspiracy. So, what do you think, is the benign conspiracy really benign?

Posted by Christopher Ott at 14:38 No comments: