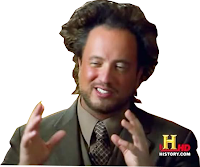 In it, anything unexplained (or explained) that's ever happened in the history of the world - the answer's aliens. From earthquakes to Bigfoot - aliens.

Or, do you remember the last time you were book shopping on Amazon, how you were really only interested in the reviews that told you what you wanted?

This inclination to have blinkers on in favour of information that fits with your own ideas...

This is the confirmation bias.

Definition: Confirmation bias is a tendency for people to favour information that confirms their beliefs or hypotheses. People display this bias when they gather or remember information selectively, or when they interpret it in a biased way. (Wikipedia, 2013)

So, suppose you tried to convince the host (crazy-hair above) that aliens don't exist. That he's wrong. I can guarantee no matter how rational your argument is, he simply won't switch to your way of thinking.

Yet, brands try and do this all the time.

To grow your brand is pretty simple. All you need to do is get more customers. And unless you expand your category (think sports brands like Nike becoming street wear), the only way to get more customers is to steal them from your competition.

But if your audience is only receptive to information and ideas that they already hold (Confirmation bias), and you know what that is because you're trying to steal these people from your competition, then isn't it counter intuitive to differentiate?

Of course it is, and marketing science corroborates this point.

Marketing science tells us that consumers shop from a repertoire. The implication of this being that category buyers share brands and don't really differ in any meaningful way. So, by differentiating, positioning and targeting, you're mindlessly ostracising potential buyers unnecessarily.

(Because they're affected by the confirmation bias they won't listen to your messaging. Just like the aliens guy above being told aliens don't exist.)

This means, with your advertising, you should be confirming your audience's existing beliefs, not differing from them, and not ostracising them.

Samsung didn't try to differentiate from Apple. They simply tapped into how Apple users saw the world and aligned with their confirmation bias. They weren't trying to be 'different' they were trying to be better.

They out-Appled Apple. And look at them now!

So what does this mean for creatives? Well, it turns out you don't have to worry about unique selling propositions (USP) anymore. They're a product of differentiation and that means they're redundant. Awesome, because an inane USP only inhibits you from coming up with a truly great idea.

Trying to get people to switch by telling them they're wrong and your (different) way is right, because of the confirmation bias, won't work. If you're married you can testify to this. So, the next time the strategist, suit, or client says you need to differentiate, you politely remind them about the Confirmation Bias and say you'd rather be better and confirm what your audience already believes than be different.


Discover more of the Buyhaviour series:

Posted by Christopher Ott at 00:34