Picture the end-scene of Indiana Jones and the Temple of Doom: the rickety bridge with the crocs snapping below. What's the odds of swimming across that river and surviving?

Now imagine, if you miraculously avoided getting eaten alive, that it was your job to do it again - and again and again. You'd be on a hiding to nothing.

This was the lot of WW2 bomber pilots. They had to fly mission after mission across enemy lines in highly-vulnerable planes.

To give them a fighting chance, airforce engineers found a way to lighten the aircraft so to add more armour, but they couldn't put it everywhere otherwise the plane would be too heavy. So, the question was: where should they attach the extra armour for maximum effectiveness?

So they analysed their returned bombers, observed where bullet holes were clustered, and then proposed the armour be reinforced in the spots where the clusters were most dense.

Pretty logical, right - protect where you can see takes the most bullets?

Nope. It's a mental short-cut: the survivorship bias. The clusters actually show where the plane is the strongest, not weakest - the areas that could take damage and the plane return - the proof palpable.

Marketers and advertisers are victim to this bias, too. It explains the irrational intoxication with loyalty and retention (targeting existing buyers). Let me translate a couple of the above lines for context:

To help save a brand, marketers were given a finite sum of funds. The only question: where should they allocate them? So they analysed their category, observed where their current customers clustered, and then proposed the funds be allocated towards them.

In other words: a campaign reinforcing - like the bullet holes - where they're already strong. And like the bombers, at first glance, this feels logical (just ask Kevin Roberts), but it's not.

If you actually want your brand (airplane) to survive and be successful you need to pay attention to the customers (bullet holes) you don't have. 'Pay' being the operative word, because you need to generally 'pay' to reach them; then nudge them into becoming buyers.

And, if you're after evidence, look no further than Disney - the smartest advertisers on the planet - and how they marketed the new Star Wars: The force is strong in this placement.

Byron Sharp and Kate Newstead, ‘Loyalty is not the Holy Grail’, Admap, September 2010
Posted by Christopher Ott at 09:42 No comments:

Buddha said, suppose you were shot by a poisoned arrow, but instead of letting the doctor remove it immediately, you first need to know who shot it, his age, his parents, his hometown, his favourite colour, his favourite food, what type of bow he used, what the bow was made of, what the arrows were made of, and what feathers were on the arrow. You'll be dead before you get your answers.

Likewise with advertising briefs. The agency receives a brief from the client, and instead of giving it straight to the creatives - the doctors in this metaphor - who will solve the problem (pull the arrow out), it instead spends months getting analysed to death in planning.

The cynic in me is aware it's corporate procrastination to extract more money out of our clients, who are happy to oblige because of an irrational enchantment of the mere mention of the word 'strategy'.

But make no mistake, the singular reason top brands use agencies is for their creative ideas. The rest they can do themselves. So, just imagine how much better the ideas would be, if the people doing the actual ideas, got more time to work on them? What if the man in Buddha's teachings just let the doctor get on with his job?

A second technique for producing ideas

Says James Webb Young, "An idea is nothing more nor less than a new combination of old elements". And, like balding CDs in trucker hats, this concept is now entrenched in our industry.

The concept metaphorically being that our brains are something like a depository of dots - experiences, impressions, observations and ideas - all waiting to be joined.

This familiar technique is actually called analogy thinking. And, along with ad agencies everywhere becoming increasingly homogenous - being filled with upper-middle class white people on Google, referencing Errol Morris commercials - it helps explain why so much advertising is the same.

We're all using the same technique.

But it's not the only technique. There's a second: 'first principles'. It's a science term also known as ab initio. Latin for: from the beginning.

With this technique you build an idea from the ground up, rather than from an existing experience sideways.

In other words, First principles thinking is the act of boiling a process down to the fundamental truths and reasoning up from there.

In philosophy it's called a priori knowledge, which means knowledge independent of experience. Plato describes it as inherent and intrinsic to the subject.

Just like first principle, it has an antithesis; called a posteriori knowledge, which is defined by its dependancy on experience, or analogy.

And, while a posteriori or analogy thinking is well established in our industry, a priori or first principles thinking is not.

Elon Musk used First Principle thinking for his ground breaking batteries, and we can do the same for ideas. Once you isolate all its elements (or brand assets) you can build your advertising from the bottom up - ab initio.

Whatever execution you come up with from that will be, like Plato said, 'intrinsic' or 'inherent' to the subject. In other words it'll be inexorably salient and ownable by your brand.

Compare that to gratuitously transplanting a brand sideways into something 'cool' you’ve seen on Youtube or (worse) another commercial, and it's easy to see the value of first principles thinking in advertising.

Where analogy thinking promotes derivative, hackneyed ideas. First principles - unshackled by the safety of previous experience - has the power to produce genuinely original and exciting ideas. 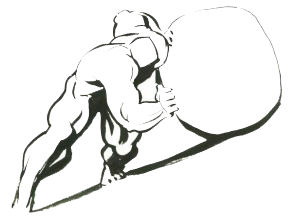 To save us all from dying, King Sisyphus tricked and chained-up Hades, the god of the underworld. This enraged Ares the god of war, who’s job, sans killing, became somewhat redundant.

For his effrontery, Ares found and punished Sisyphus. Damning him to roll a boulder up a hill every day, only for it to roll down each night for him to start over, ad infinitum.

Whether for new business or new ideas, advertising creatives get stuck in this Sisyphean nightmare - pitching for the paper shredder. Toiling to conceive creative ideas that don't get sold in.

Einstein's platitudinous quote comes to mind: "Insanity is doing the same thing over and over again and expecting different results". Yet that's what we ask of creatives.

Dan Ariely quantified the effect in an experiment. In it he paid 2 groups to build Lego Bionicles. The pivotal difference between the groups was this: the first's was pulled apart later, while the second's was dismantled as they were built - in front of their eyes.

The result: The first group averaged 11 Bionicles; the second only 7. In other words, seeing the fruits of your labor amount to nothing - like the boulder rolling back down the hill - decreases motivation.

The same way the participants were demotivated by seeing their Lego destroyed, so are creatives when their work persistently finds a home in their bottom drawers rather than out in the wild.

Albert Camus, the french existentialist, says "the struggle itself towards the heights [of the mountain] is enough to fill a man's heart". While some version of this is what creatives tell themselves to carry-on, I don't buy it - not when it's proven that creativity's the cornerstone of effectiveness.

Look no further than Binet and Field's watershed work 'The Long and Short of It', which irrefutably concludes that big fame-making ideas - the ones clients are averse to - are the most effective.

Coming up with ideas is punishing enough on creatives for them to be repeatedly dismantled. Someone, who clients aren't skeptical of acting out of self-interest, has to protect the ideas. To champion creativity. To help avoid a Sisyphean tragedy.

And that's why I swapped Keynote for Powerpoint, and why I went back to study, and became a full time planner - not just a creative who thought they’re a strategist because they learned the word ‘differentiation’.

But it didn’t last. It was all input and no output. I missed creating things, so I went back to the creative department - better, smarter, stronger for the experience. Who says the Renaissance man is dead, eh?